If you are a Windows Phone Developer combined with adequate amounts of geek, you will most likely have upgraded your work machine to Windows 8. All is good initially until you open your latests and greatest solution in Visual Studio 2010 and hit F5.

You get either this 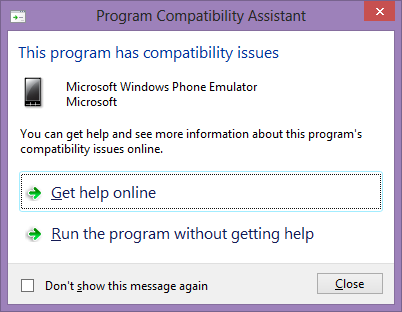 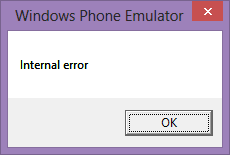 or maybe even both

The solution is to install the SDK version 7.1.1, which is now available from Microsoft. It takes a while to install, so be patient. But in the end you see the sweet nectar of emulation running on your shiny Win8.

I have been using Windows Phone as my primary mobile OS since it came out in October 2010. I had an iPhone, which I was very happy with, but the lack of innovation and the extremely strict rules imposed on the device I own made me consider my options, once my contract was up for renewal. I have probably always been a bit of a Windows Fanboy, but the first iPhone available Down Under (got mine in 2008) was by far the best device on the market at the time. The Windows Mobile offering (which incidentally preceded my iPhone) was clunky, ugly and designed by developers.

When WP7 came out in Australia the iPhone penetration was close to 50% for all mobile web traffic and that was only due to Android. No one really cared about WP7. Except me.

To me it was a lime green car, a platter of raw marinated fish, a … Allow me to explain.

I would argue that most of the “popular” consumer items have the sheep effect. If it is shiny and the guy next to you have one and tells you how great it is, you must have one too. Surely it must improve your life exponentially and you can get all the benefits that everybody else gets, combined. This shininess is a major part of anything being successful, as well as a well-oiled marketing machine. Most of the people I ask why they have an iPhone, will say something like “It is the best”, “I can check my email” or “I can listen to music and download apps”. Most bought it because it is “what you do”. This is what I call the sheep effect. Just look at the long lines outside Apple stores when a new product is launched. None have held the device or even seen it, yet they still part with a large wad of cash buying an unseen and untested item. Hats off to Apple.

And this is where I like the lime green car. Most people buying a car will get a silver, black or white car. Mainly because of resell value, but also to not stand out too much. They want the safe choice that everybody else has. In my world the grey, silver or black car is the iPhone. Not terribly exciting, but shiny and has some nice buttons. Oh, and everybody else has one.

And all this leads me to an article I recently came across. For some reason people are now starting to port the Metro UI from Windows Phone to iOS. Seems odd that someone will try and force a conceptually completely different paradigm onto the iOS platform, but all I can surmise is that there must be a market for it. Perhaps it is a case of “because I can”.

I am generally not a fan of making something fit into a mould that was never meant for it in the first place, and this is the same. If you want Metro UI, get a Windows Phone. Or even Windows 8 very soon.