A couple of months ago I was in London for NDC, and besides doing two workshops (one privately and one at NDC), two talks at NDC, hosting the evening event on the Thursday night, presenting at PubConf on the Friday night, I also managed to record three courses for Pluralsight in their “Play by Play” format. Before I get to the actual courses, let me explain the concept.

How The Sausage is Made

As with any other course being published in Pluralsight, there is a relatively extensive and thorough proposal process preceding the recording. For each play by play a full proposal that outlines the concept, modules, demos and overall approach needs to be completed and approved by the Pluralsight content managers. The content manager is the person that understands the material in the current catalog on the website and knows if this particular proposal will be a good fit.

Once your proposal have been approved you can start scripting the actual course in detail. Now, you might think “hang on, the play by plays are a natural conversation between two people”? Yes, it is, but it is also a very carefully planned conversation that needs to cover the material in the approved proposal. Once you have all of the demos you need to show ready, as well as the script (which is usually mostly bullet points), you are ready to record.

Recording a Pluralsight course is very often a solitary and prolonged process. You sit in a quiet room and record your voice hour after hour. You stare into the microphone and start imagining it is a kebab. You often do it late at night when everyone is asleep, because that is the only way it is quiet enough. Sometimes you need to find unusual places to record to get good sound.

It takes weeks to record, weeks to edit. You create hundreds of slides in Powerpoint and at the end you are both ecstatic it is done, but also so sick of looking at the course you hope you’ll never see it again. And then you do it all again two months later.

Recording a Play by Play is completely different. First of all, you get your ugly mug on the screen. Contrary to normal Pluralsight courses where only your voice is present, a Play by Play is recording your whole person. And there are three cameras as well as capturing both screens of the laptops. A professional AV team is in charge of all the technical details and you only have to focus on creating a great course with demos and discussion. Once the recording is done, you walk away. Editing is done by Pluralsight staff, and you only have to do the voice over for the course trailer afterwards. 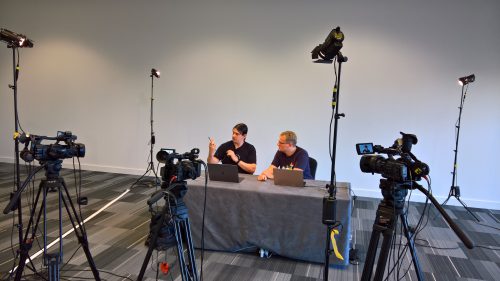 The Play by Play courses are deliberately short compared to standard Pluralsight courses, so they are easy to consume. They are also a bit more natural, as it is just a conversation between two people.

I should talk about the course I did with Stephen Haunts, a good mate of mine and encryption expert. Because Stephen has outlined what the course is about on his blog, I won’t go into too much detail. The course explains how encryption can be used with relative ease to secure your data integrity, how you can manage encryption keys and how to use the cloud for implementing encryption that is more robust. It really is a great entry to understanding the topic, and I should know; I was there! 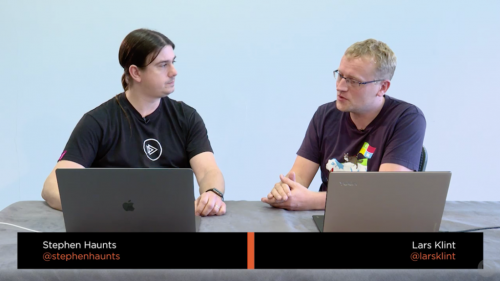 I am going to be doing a lot more Play by Plays in the coming months, and I hope you find them as easy and useful to watch as I do.

Check out Enterprise Data Encruption with Azure Revealed today, and if you need a free 30 day trial pass give me a shout.