First of all, I could get to know other authors, pick their brains, learn from the masters of video courses and fill my brain with new inspiration. As a new author, seeing and hearing what other authors do and how they think about content is incredibly valuable.

Second of all there was an opportunity to talk to the people in charge of the content, the actual people that formed the curriculum based on the output from all the authors. Getting to know what they value and what they focus on, as well as having an influence on what content they might consider in the future was too good an opportunity to miss. So I went.

The summit was everything I wanted it to be and more. I drove Aaron Skonnard’s brand new Tesla Model 2, played some mysterious mind game with other authors, won a Pebble watch, made some amazing friends, visited a local TV and radio station, had some terribly American burgers, talked to a ton of Pluralsight people and even presented on stage to all the other authors. It was a massive success. 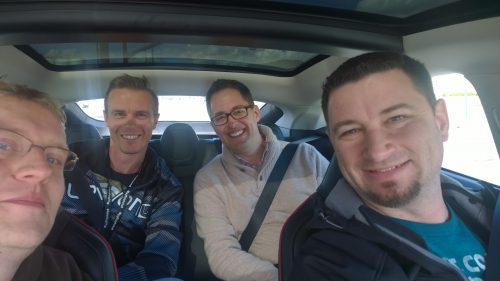 The year after I went again, and it was equally amazing. I did some YouTube interviews with other authors, participated in a ton of discussions around all aspects of Pluralsight content, drove Aaron’s car (again), and even recorded my first Play By Play. My first of many.

Last year, Pluralsight tried an online version of the author summit, but it was difficult to get the same engagement and level of discussions, as we had the first two years. I don’t think the author summit will go down that path again.

The next step on the evolutionary ladder of author summits is a new event called Pluralsight Live. It is technically not just an author summit, but rather an event to bring together authors, learners, managers and everyone in between. It is a place to discover what talents are already on your team, build a learning strategy for future trends in technology and update yourself on what to learn next, and how to learn it.

Where leaders, technologists and visionaries collide.
Out from behind the computer screens, lines of code, tangled cords and clogged inboxes is a community breathing life into fresh ideas. They push the boundaries of what’s possible, inspire one another, and share it with the world. They’re innovators, change-makers, mentors and friends. And they don’t just keep up with the pace of technology, they set it. Energy like this only happens face-to-face. It only happens at Pluralsight Live.

The first day of the event is an actual author summit, which I am looking very much forward to again. I am also presenting again this time, on the new Microsoft Fluent design framework, which will be very interesting. Of course I am looking very much forward to the talks of Joel Spolsky of Stack Overflow fame, my good mate Troy Hunt with Dale Meredith, John Elliot and Megan Manfre on the security panel, as well as talks from Orin Thomas and Scott Allen.

What is really exciting is that anyone can buy a ticket and come along to this gathering of some of the brightest minds in tech. And it just happens that I have this special discount code LKlintPSLIVE that you can use to get a good deal on tickets.

Join me. It will be amazing.