What is new in Windows Phone 8.1 – The Best Bits

I wasn’t lucky enough to go to //Build/ this year, but that didn’t prevent me from keeping a keen eye on the new goodies that were revealed and presented. I have been waiting with great anticipation to hear all of the news, and especially my Twitter feed has been studied very closely on the past few days.

So what was revealed exactly? Obviously Windows Phone 8.1, which I will get back to, but also new handsets from Nokia (or is it Microsoft?), Xamarin news, Windows updates and much more. In fact there was so much that many details were missed initially. But let’s go through the best bits of Windows Phone 8.1.

I am hugely excited about Cortana, the new digital assistant for Windows Phone. To be fair it is a competitor to Google Now and Apple’s Siri. But Cortana is so much more. She (because Cortana is a female character out of the Halo games) will continually learn about you, as you use your phone and carry it with you. She will know about calendar appointments, your contacts, your searches and is based around the Bing search engine. It is a hugely ambitious feature that will, in my opinion, make or break the switch for users to Windows Phone. Because of this it will only be launched in the US, the UK and China this year, and other countries in 2015. As an Australian users, this is disappointing, but if you look into the amount of intelligence and logic Cortana adds, it sort of makes sense. It isn’t going to help the adoption of the platform outside those markets though.

According to first impressions, Cortana is much more advanced and useful than either Siri or Google Now. You can personalise it so much that is becomes a very useful companion and can remind you to ask your sister about her new dog, tell you about upcoming traffic on your home commute or launch apps on your phone. See more in the video below.

I am really keen to see what the Cortana API will allow third party developers to do with regards to integration. I would love to be able to see developers be allowed to influence Cortana based on how the user interacts with your app. Imagine your healthcare app reminding you of doctor appointments when you are close to your medical practitioner, or a Twitter app that knows what news you are interested in at any given time. The possibilities are endless. 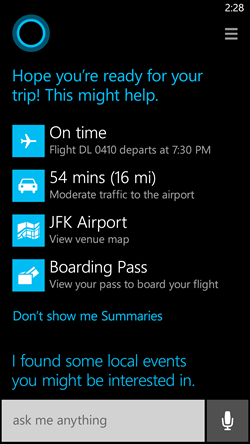 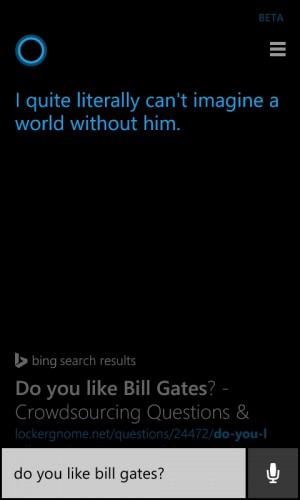 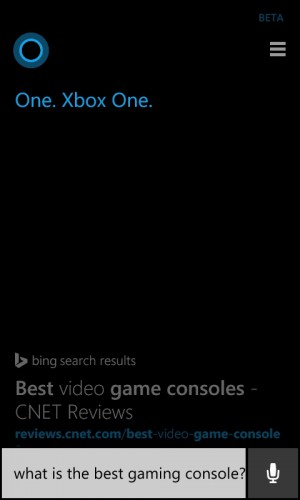 One of the most engaging and differentiating parts of the platform is the start screen with live tiles that gives information at a glance.

When the Nokia Lumia 1520 was introduced, a third column of live tiles was added. This column is now being added to all Windows Phone 8.1 devices as an option. To me this makes the start screen even more personal and more useful. Much more real estate to pin away all the apps!

The background can also now be your favourite photo. And if you choose to, the live tiles can reflect the background photo rather than the theme colour. I am yet to decide if this just becomes annoying after a while, or is it another part of personalising your phone. 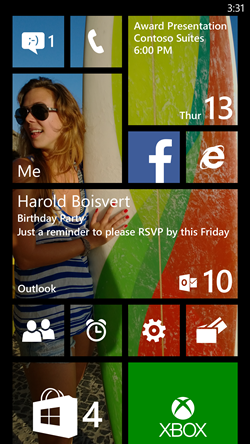 There is now also a variety of themes that you can choose for your lock screen to further personalise your device. It is not quite clear yet, how developers can customise the lock screen, but imagine having your app set the lock screen layout. This could have immense branding value for major apps, and also allow newcomers to be more in the forefront of consumers’ minds. 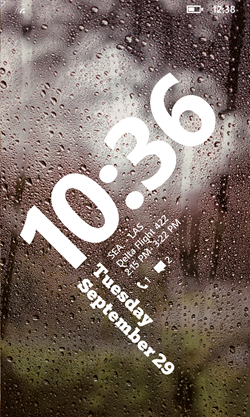 Up until now if you received toast notifications, such as an auction reminder from eBay, if you missed it, it was gone. No way of knowing you had been reminded. With the new Action Center you have a location for all those notifications, but it is much more than that. You can also set quick access to the settings you use the most, such as Wi-Fi, flight mode, Bluetooth and so on. This is another efficiency improvement that has, frankly, been a long time in the making. 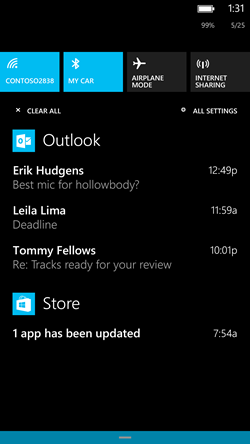 The keyboard on Windows Phone is okay, and it is easy enough to use. The predictive text makes it easier and the fact it learns your common word combinations makes it faster. Now the Word Flow keyboard is here. It will take a page out of Android’s Swype keyboard, and improve on it to make it the World’s fastest keyboard. It knows about your contacts, lets you slide your fingers over the keyboard, and overall makes your typing lightning fast. I haven’t tried it yet, but I am very keen to see how easy it is to get used to.

Week view! Week view! Week view! It has been the single most requested feature for the calendar app, and I completely agree. It should have been in there from the start, but is now finally here. Along with other improvements such as swiping left and right to change day, week and month, it seems the calendar is now actually usable for more than just occasional usage when you didn’t have access to a desktop. 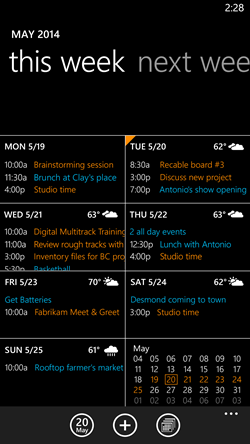 Windows and Windows Phone Together

Finally, this is the biggie for developers. Windows and Windows Phone apps are now much closer aligned, and some new apps will work on both phone and desktop. IE11 finally have tabs integrated across devices, and personal settings such as theme colour and WiFi passwords are also synced across all your devices.

For developers this is one step closer to developing one app for all platforms. We aren’t there yet, but it is getting closer and closer.

Disappointingly there is yet no official date for when you can get the 8.1 update on your device, other than it will be over the Northern Hemisphere summer. [Update: You can get a developer preview on April 14]. What has been promised is that the update will be available and working on all current Windows Phone 8 devices. The new Nokia Lumia 630, 635 and 930 will all have 8.1 at launch….which hasn’t been announced yet either. I guess there is a bit more waiting to be done.

And finally here is Joe Belfiore’s summary of the new features. Enjoy.