Just yesterday I did another interview about HoloLens, what it is and how it fits into the world of virtual and augmented reality. It is a question I get a lot at conferences, user groups, client meetings and of course on social media. Had you asked me two years ago it was a reasonably straight forward answer, with three distinct categories of digital realities. 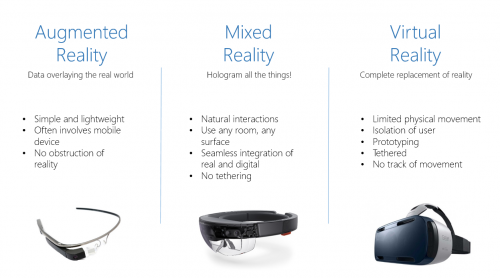 However, as the technologies evolve, and especially with the introduction of Apple’s AR Kit and Google’s AR Core, the lines are blurring. The once firm definitions are becoming more gray so much so that fellow HoloDeveloper Rene Schulte the other day did a 12min video to explain where mixed reality belong. It will likely end up being all the same definition, whether it is virtual, augmented, mixed or something else entirely. It is both exciting and frustrating at the same time.

Back in June 2017 I was presenting at NDC Oslo and while there I recorded a number of play by play courses for Pluralsight. One of those was with my good mate Stephen Haunts (who has glorious hair) on exactly this topic: digital realities. If you don’t know what a play by play is, go read Steve’s post about it in detail.

The course is now live and is a great insight into how you can get started building apps for mixed reality and HoloLens. Go watch the trailer now!